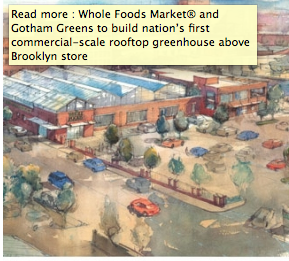 Fresh after what many called the company’s groundbreaking rules regarding vendors and GMO transparency, Whole Foods scored another big green thumbs up with its Monday announcement that Gotham Greens would operate what the company stated is “the nation’s first commercial scale greenhouse farm integrated within a retail grocery space.”

Gotham Greens current hydroponic operations in nearby Greenpoint, Brooklyn produce approximately 100 tons of pesticide free produce annually. In a TEDx Brooklyn presentation Gotham Greens co-founder Viraj Puri stated that the company’s current facility uses ten time less water than conventional agriculture, twenty times less land, eliminates the use of pesticides through the introduction of beneficial insects and produces no run off, one of the world’s leading sources of water pollution.

For more see an interview Puri on the TED Blog here.

As noted in NBN Whole Foods recently announced that all coconut water vendors will be required to conduct ethical sourcing audits. In 2012 the company removed Hershey owned Scharffen Berger chocolates from store shelves due to Hershey’s inability to verify cocoa suppliers were not using child labor. Hershey owned all-organic Dagoba was not impacted by the removal. As with all organic foods, manufacturer’s are able to trace all ingredients, from farmers to suppliers and shippers, as well. This is due to the need to maintain and verify organic standards are being met, and aid in the ease of verifying labor, environmental and other sourcing issues as well. See the GreenAmerica chocolate scorecard here.