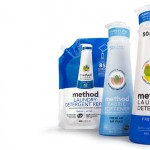 As reported in the Minneapolis/St. Paul Business Journal on April 28, Minneapolis based Caldrea, makers of the highly successful Mrs. Meyers brand of biodegradable laundry, house and pet cleaning products was purchased by S.C. Johnson for an undisclosed sum. S.C. Johnson & Son, makers of Windex, Raid, Scrubbing Bubbles and Ziploc bags is the second […]

Maybe once again we expect too much from the media. But it seems like common sense that a piece in in today’s New York Times in a section called Greening Business discussing Clorox’ new Green Works line of soap and cleansers, would have to devote more than just give a mere passing mention to the company that started it […]

CNNMoney on Wal-Mart and Seventh Generation

In an otherwise run-of-the-mill story on green consumer goods, CNNMoney reported on opportunities for Seventh Generation to sell products in Wal-Mart. The story money.cnn.com/news/articles/newstex/IBD-0001-23786283.htm reported that Wal-Mart has contacted Seventh Generation about selling its products. Notably, the piece glaringly failed to mention http://naturalbusinessnews.wordpress.com/2012/05/05/clorox-goes-natural-with-burts-bees-and-green-works Clorox’s recent entry into the biodegradable cleaning segment, which left us thinking it […]

NBN has had more than a few friends buried deep in Excel spreadsheets at Clorox Headquarters in Oakland, California and based on their experience we think that the November 2007 addition of Burt’s Bees to their lineup will do well.  Everywhere we turn, there’s another Burt’s Bees display. The bigger question is, how long can […]