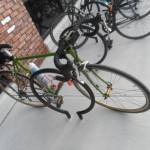 By Brian Stowell The Suburban Cheapskate on May 13, 2009

When you find yourself holding food up to the light like it’s a shard of medieval stained glass, you’re either at the peak of a high caused by your favorite illegal substance or you’re humbled by a sliver of the divine. We may find that the cassava chip will someday be hailed as a design […]

By Brian Stowell The Suburban Cheapskate on May 7, 2009

If you knew me personally, the first thing you’d ask when you heard that I’m writing for this site would be: “Why would they want YOU to write articles for THEM?”You might wonder what a guy who never buys organic is doing here. If you thought that I’m looking to be saved, for a messianic […]

The Urban Cheapskate: Goes to the Food Court

By Fritz Van Orden The Original Urban Cheapskate on May 5, 2009

You may have heard of the Suburban Cheapskate. Well, long before that there was the Original Urban Cheapskate. Unfortunately, staff at this website misplaced the original UC column but managed to pirate the name. Now the Urban Cheapskate is back to correct the editorial oversight and advise: Accept No Substitutes! Recently, our Cheapskate was forced […]

By Fritz Van Orden The Original Urban Cheapskate on March 30, 2009

Recently Your Original Urban Cheapskate went shopping at Integral Yoga Natural Foods to pick up some bulk mixed nuts, dried pitted prunes and wheat-free raspberry newtons. The mixed nuts are obscenely expensive, but he was going out of town for a few days and always tries to carry along something edible so he doesn’t starve […]

By Brian Stowell The Suburban Cheapskate on March 1, 2009

Think global, act loco  I’m in Orange County, California. That simple statement elicits reactions. Ok any simple statement will elicit some kind of reaction; even indifference has its facial tics. But when you’re the subject of television soap operas and you are populated by the crème de la crème of affluent trailer trash, you tend […]

The Urban Cheapskate: Goes to the Brooklyn Farmer’s Market

By Fritz Van Orden The Original Urban Cheapskate on September 19, 2008

Come September and it’s the height of the season at the Saturday Farmers’ Market at Brooklyn’s Grand Army Plaza. The place is absolutely aswarm with yuppies, all returned from wherever it is they go for the summer anyways. Indeed, quite the bumper crop. And there was some produce for sale, too. Your Urban Cheapskate recently […]

The Urban Cheapskate: When Does Your Packaging Become PR

In the midst of designing a new package for a natural or organic product, most discussions revolve around that mystical word brand. So lets start with a definition, albeit an unconventional one, of branding as well as advertising and PR, too. I’d like to introduce you to my friend Bob. Notice what Bob is wearing, […]

The Wine Guy: Londer Syrah Is Long, Like A Great Summer’s Day

I’m signed up for a lot of e-mail offers and this wine from Londer Syrah Gabrielli Vineyard 2002 Redwood Valley really surprised me. I considered it just a throw-in on a special 3-pack from Londer. I really wanted to try the other two wines, but I couldn’t get the free shipping unless I took this […]