After removing Hershey owned Scharffen Berger Chocolates from its stores due to ongoing concerns over Hershey’s sourcing procedures and  child labor, BevNet reports that Whole Foods is now requiring all of its coconut water vendors to conduct ethical sourcing audits from a list of store approved 3rd party auditors.

Another Hershey brand, Dagoba Chocolate, sells organic, rainforest alliance certified and a few fair-trade certified products is not impacted by the removal.  However, as rated by non-profit advocacy group GreenAmerica,  Dag0ba got a passing grade of C, far less than other brands such as Alter Eco, Equal Exchange and others. Dagoba, was purchased in 2006 from chocolate pioneer Fred Schilling who is now co-owner at the innovative and inspirational Big Tree Farms. 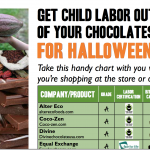