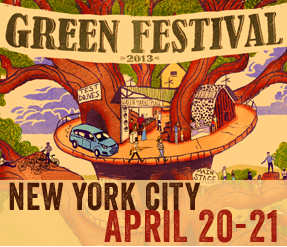 Maybe its because I used to drive a cab in Manhattan in the 1980’s when the city was broke and tranny hookers and sex clubs commandeered the late night meat market streets long before the Apple Store, Japanese designer boutiques and oh-so-haute hotelier sprouted from the loins of the 1%.  Like more and more of Manhattan, and (sigh) too many more parts of Brooklyn  too,  it’s a playground for the rich with the rest us as onlookers catching the fun as we can.  Bitter, not really. Sad, sure, but also fascinated by the changes.

And one change in New York that leaves NBN even more wide-eyed than a hayseed-iest tourist on their first day in the City is the greening of New York.  I’m not talking just about the High Line.  It’s great but as gorgeous as it is, that park is so consistent with fashionista, high-heeled, venture capitalist New York that despite its many merits we always leave it feeling nauseous.  Like we ate too many of those overpriced, over-hyped red velvet cupcakes from the Magnolia Bakery.  Barf.

Now Riverbank Park, up in Harlem, built over a sewer treatment system situated across the West Side Highway  next to the Hudson, that’s a park, one for the people.  Even with the smells, that lights us up.  Liberal guilt?  Maybe. I just don’t know.

But more recently, green is the new black as bicycle lanes sprout up all over town, lawn chairs are scattered on Broadway and free kayak rentals and even Pilates classes are available on the Hudson.  Not like the old days when I used to notice how many minutes (usually 5 to 10) it would take me to count ten dead and floating fish.

Today you can start at Zabar’s and end up in the wild reeds in Hudson River Park licked split.   Grab stuff for a picnic (I don’t mean shoplift and don’t forget some rugelach, walk or bike through Riverside Park down to the Hudson and head south on Hudson River Park.  You’ll discover a series of amazing green pocket parks, art installations, wonderful outdoor seating that provides a new visual and kinesthetic surprise every time I go.  The sun or the shadow, the plants grown tall or dormant are different every time.  Of course this is what mother nature does.   But not in New York this mother that  left  decades ago and her return is a marvelous reclamation, a re-creation of what it’s like to be outdoors, experience the wind and the sun, the heat and the cold in the heart of the city.

Like usual, I’ve probably had too much yerba mate (oh how the once cranky NYC cab driver haschanged after 20 years in San Francisco — no more donuts and skim milk for me) and blather on too much, but here’s the point.  While the landscape improvements are amazing, they’re just the tip of the iceberg.  But this small step, this connection with the sun and the air, they sky and the wind and the grass (the kind underfoot, not the smoking variety) is essential, especially in this city where ever taller high rises blocking out the sky grow faster than an invasive species.  In New York it’s easy to ignore, to forget, to disregard Mother Earth.  After all we only hang out with her on the weekends before rushing back into town. “And boy, the traffic on the Thruway, it nearly killed me. Thank GOD for the DVR.”

The Green Festival in New York must be something else. People in NYC work harder to make things happen.  In this CITY people who get excited are more passionate, hectic, inspired and energetic than anywhere else, so the Green Fest here has to be the best.  The Green Festival in San Francisco, where I live is of course terrific. But we San Francisco-ers are a jaded bunch, surprised that our friends in other cities don’t have curbside compost pickup and that takeout containers aren’t made from corn starch?  In NYC nothing comes easy and victories are most sweet.

If it wasn’t so exciting you probably wouldn’t be thrilled to death with your 350sf studio overlooking an air shaft in Hell’s Kitchen that you’ve been gratefully subletting for the last four years at the bargain price of just $1,975 a month. But oh the bagels are so great and I  know, the pizza, too.  You don’t have to tell me!  I have dreams about the cannoli at Court Street Pastry and even greater lust for the Lard Bread from Caputo’s Bakery,not to mention the rugelach at Zabar’s or one Midwood’s kosher bakeries.

There’s another high line hoping to get built, this one in Queens.  Take a look at the NY Times story on an abandoned railroad track in that other borough.  Project organizers are seeking big donors to make it a rural intersection, a High Line East, connecting blue collar, middle-class, immigrant, fertile Queens.  As an added bonus, it goes through some of the best ethnic eats in America.  Let’s hope this gets funded and proves my cynical side  wrong.  The pessimist in me worries that beautiful parks are impossible to build these days unless there’s an Apple Store nearby and the brown people in the neighborhood are tourists on vacation, not immigrants that live there.

Meanwhile it’s increasingly hard to remember those years when the rotting, abandoned, elevated West Side Highway spit chunks of concrete on cars underneath,recalling Charles Sheeler and  siting astride the ramshackle piers, where men had sex or just watched, money wasn’t imperative  and the freedom of living in NYC was perhaps never greater.  But while we mourn the loss, can we celebrate the reclamation, too? 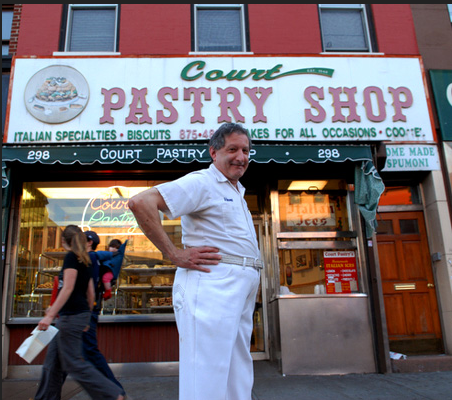