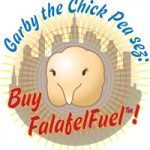 In a press conference at New York’s City Hall, Mayor Michael Bloomberg, Taxi & Limousine Commissioner Matthew W. Daus and Norharvest Bean Growers Association Norbert Johannson unveiled a plan to fuel all taxicabs and car service vehicles in the city on a new bio-fuel made from garbanzo beans.“For too long chick peas have been unfairly […]