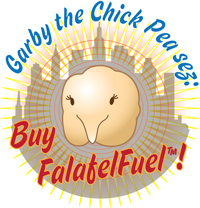 In a press conference at New York’s City Hall, Mayor Michael Bloomberg, Taxi & Limousine Commissioner Matthew W. Daus and Norharvest Bean Growers Association Norbert Johannson unveiled a plan to fuel all taxicabs and car service vehicles in the city on a new bio-fuel made from garbanzo beans.“For too long chick peas have been unfairly segregated to salad bars and the falafel” Mayor Bloomberg said, adding “Today New York takes another step in confirming our place as the greatest city in the world and a helluva place to eat a pita.”Norbert Johannson unveiled Garby, an iconic walking and talking cartoon bean, who Johnson said will soon be traveling the country in a pita-shaped vehicle distributing “Be Cool Drive with Falafelfuel” bumper stickers, hats, key rings and bobblehead Garby toys. Falafelfuel will be available later this summer.

Cars running on Falafelfuel must install a garbanzoverter metric valve, which Johnson assured this reporter, can be easily added to any vehicle manufactured in 1998 or later.

“While we certainly applaud any move to create a cleaner New York, I mean this town is filthy, we are carefully waiting to see how this will impact garbanzo bean prices. Falafel lovers deserve a fair deal and we worry that New York’s love affair with these deep fried balls from heaven will soon be out of reach except to those living in Penthouses and on Park Avenue.”

The Mayor’s office refused to comment on rumors that hot dog cart water is also being researched for use as fuel for the city buses.