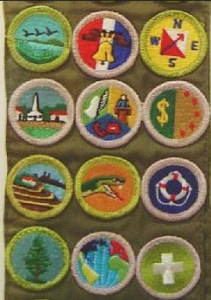 Continued controversy over the Boy Scouts of America’s recent announcement that it would allow openly gay scouts but prohibit openly gay scout leaders and volunteers prompted the US Department of Energy to rescind its partnership with BSA.   Last fall the Department of Energy and the Scouts begun plans to for a series of new badges, that in the words of the Boy Scouts of American would “allow our young men to do more than just know how to build great campfires, use a compass and make mouth watering s’mores.”

While only a dozen scouts had been honored with Radiant Floor Heating merit badges, a number of chapters that were developing merit badges for Grey Water Recycling, Passive Solar Heating and Straw Bale Home Building. All plans for new badges have been suspended until the flames from the gay debate die down.

An attempt to reach a member of the Boy Scouts of America executive office for comment was unsuccessful.  However one local leader, who wished to remain anonymous told NBN that “it seems like we should pay more attention to how to reduce our use of fossil fuels because as far as I know, neither heterosexuals or homosexuals are going to be doing much of anything is the planet keeps on getting hotter than blacktop pavement in an August heatwave.”