The Sunday New York Times story The Brain — Our Food Traffic Controller should not be missed In a story that should be getting wider circulation, author Hannah Wallace details how to feed a family of three all-organic foods on a food-stamp budget, published in all places Bon Apetit Blog.  Take a look at Wallace’ […] 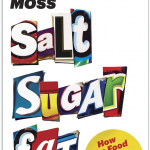 Salt, Sugar Fat on the Science Behind Addictive Foods

While we knew some details about the product development that goes into creating crispier, more satisfying snack foods and  making some cold breakfast cereals have a shorter bowl life (soggy sooner like Life cereal) versus a longer bowl life (a la Captain Crunch) when NBN read the excerpt from Pultizer Prize winning author Michael Moss’ […]