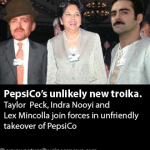 NBN EXCLUSIVE:  In a shocking announcement Taylor Peck of Taylor’s Tonics and Lex Mincolla of Prometheus Springs announced their hostile takeover of Pepsico, the 2nd largest food and beverage company in the world.

Seated in hammocks under Alexander Calder’s “Hat’s Off” in the sculpture garden surrounding Pepsico’s headquarters, Taylor and Mincolla flashed their trademark smiles just briefly when confirming reports that Pepsico Chairperson and CEO Indra Nooyi would be staying on with the new company as CEO.

“Taylor and I believe that this deal will stand out in history,” Mincolla stated.  While acknowledging that “there will be many doubters questioning our ability to grow sales of Doritos, Gatorade and Tropicana Twisters,” Mincolla noted “cynics have always been present anytime history is made.  Some called  Guttenberg’s bible ugly.  Others said The Wright Brothers contraption would never get off the ground, and even Ice-T had his doubters when he first started to act.”

Peck pensively fondled his fedora before adding  “unlike many old school business leaders our approach to carbonation offers the perfect fizz for the 21st century era of Facebook, Mountain Dew and 19th century facial hair.” 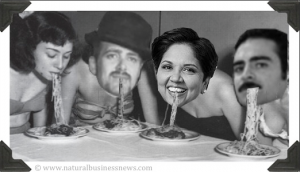 Based on an anonymous tip believed to have come from an intern at BevNet.com, NaturalBusinessNews staffers began trailing the unlikely beverage and snack food troika at the Natural Products Expo West where they were first spotted eating mussels bianca, cheesy bread Florentine and a large platter of spaghetti and meatballs at Bucca di Beppo on Harbor Avenue in Anaheim.  An unknown ‘b-girl’ was also seated at their table.

Unconfirmed reports indicate that the three formulated plans for the takeover at a Denny’s in Garden Grove the following evening in an all night strategy session.

A Denny’s waitress who only identified herself as Inez told NBN that she initially thought the haggard trio were drug dealers because they kept on talking about coke and how to kill the competition.  She added they left “a great tip” and added  “even though not one of them finished their grand slam breakfast they devoured four baconalia maple bacon sundaes.” 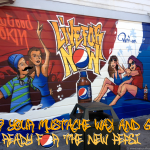 EDITORIAL NOTE:  In a previous version of this story we referred to the shellfish dish consumed at Bucca di Beppo as mussels Bianca Jagger.  As noted in the revised copy the dish was actually mussels bianca  We regret the error.