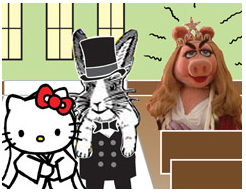 At the conclusion of the reception, Miss Piggy, Bernie’s long-time ex-lover, reportedly threatened to “kill that big-eared bastard,” adding, “I told him to take that job with Annie’s when they were nothing. If it wasn’t for me he’d still be working magic shows.”

While Miss Piggy and her agent refused comment, friends of the porcine star stated that she was happy as a pig in a new TV series, claiming that reports of her rage were overblown and the result of some off the cuff comments fueled by too much champagne and a lactose intolerance reaction caused by eating too much cheddar.