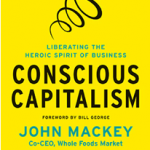 While in Boston promoting his new book Conscious Capitalism, Whole Foods CEO John Mackey proclaimed:  “If we allow it, I have no doubt capitalism will wipe out poverty and illiteracy,” Mackey said. “Humanity has been lifted up by business and yet it has been completely hijacked by its enemies who create a narrative that business is selfish, and greedy, and exploitative.”

For those who seem to think that the free market is the commercial equivalent of Mother Theresa combined with every doting grandmother in the world we suggest reading The Betrayal of the American Dream by Pulitzer Prize winning authors Donald Barlett and James Steele.  Whether one agrees with their prescriptions, the authors diagnosis of how American free market capitalist democracy is serving the rich at the expense of everyone else is startling clear. For more on Mackey’s Boston media tour see the Boston Globe story here.

In a world dominated by spin control and calculated press releases, Mackey’s eccentric approach to PR is refreshing.  But as we’ve written before, folks in Austin at Whole Foods corporate are probably praying that their visionary founder gets laryngitis soon, because the grocery world has more and more equally talented competitors ready to serve those fed up with his libertarian proselytizing.