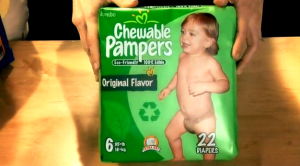 NBN’s first job in the natural foods business was working at a small store in Westport, Connecticut called The Fountain of Youth.  The name wasn’t just metaphorical.  There was actually a small fountain near the front of the store. I believed it slightly resembled a miniature version of the Elfin village from Lord of the Rings.

When biodegradable diapers were introduced there was no room in the small store to merchandize them, so the fountain was dismantled to make room for these supposedly ecologically diapers.  A couple years later we learned that the diapers would indeed biodegrade, but it would take about 100 years.  So we stopped selling them and put the fountain back in its place but it never worked again.

In the spirit of the never ending spiral (or should we say miasma of marketing) here’s a great clip from Saturday Night Live .  And if you’re looking for something that really biodegrades check out gDiapers  We’ve come a long way BABY!