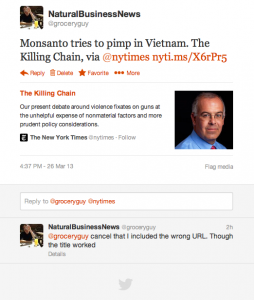 A funny thing happened while reading the NY Times opinion page and eating my favorite noodle soup at King of Thai Noodles #2 on Clement Street.   (Which Yelp unfairly gives only 3.5 stars but that is an issue for another time).

NBN tweeted about a NY Times piece detailing Monsanto’s efforts at convincing Vietnam to allow the use of GMO seeds.  By mistake I attached a David Brooks essay called The Killing Chain to the tweet instead of the actual story.  The title made perfect sense in what many view as the impact of Monsanto’s efforts around the globe. (If you’re getting in a huff at that accusation wait until you’ve finished reading, to fire off a comment, please).

Years ago I attended a small breakfasting meeting sponsored by the great fair trade company Alter Eco.  At the breakfast were several Thai rice farmers.  They came from an area in Thailand where three of four dozens of types of rice were grown by numerous small, family farms that had been growing rice for hundreds and hundreds of years.  The varieties of rice one grew depended upon a number of factors.  If you were Hindu you grew one type of rice, Buddhist another type.  In addition where you lived (in the hills or down in the valley) how many children you had and other factors all impacted the types of rice a farmer grew.

Monsanto with its persuasive ways convinced the King to allow GMO seeds and educate these old family farms about the advantages of these methods.  By persuasive we don’t mean Tony Soprano but do mean some form of the age-old, pay to play, sort of deal.  Whether it included Swiss or Cayman Island bank accounts nobody knows.

After the introduction of inputs from Monsanto, these farmers, skilled in marrying faith, culture, family, geography and growing rice soon began to see their harvests shrink.   Those seeds Monsanto so wants us to believe are needed to feed a hungry world are no solution.

Humans often over reach.  Adam eating the apple, Pandora and her box, Icarus’ dream of flight.   Monsanto’s efforts are all too human but their impact is likely to be far more frightful.  Am I being overly dramatic.  Lets hope so.  That the future proves I’m wrong.  But who do you really trust?

Nearly all those farms failed, most after just a few years.  Large agricultural interests bought these once small farms.  And so it goes.