Relax, it’s just food. Most people in the world don’t have enough to eat and millions die from dirty drinking water every year. We get to complain about Whole Foods.

In a unique effort to create “less mucus and less worry in the world” the Raw Milk Manufacturers of America announced that they would begin posting pictures of Missing Inner Children on their glass bottles beginning this summer. The new effort is the result of a nearly two year lobbying campaign led by beloved actress […] 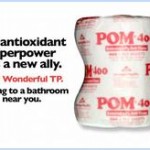 Not too long ago, the only people who ever bought pomegranates were either marinating lamb or decorating their house for the holidays. Well, thanks to the folks at Pom Wonderful, pomegranate is more popular than a drug dealer in small town America. But things just got better with the introduction of new POM WONDERFUL toilet […]

Dear Gene, I arrived early for my 8:30 am appointment after flying in on the red eye. By 10:15 I had finished two expense reports and compiling notes for the launch of our new Chipotle Wasabi Merlot Mustard Zing Sauce. An hour later the buyer emerged and yelled “What the &*%$ are you still doing […]

The Conference Board, best known for its Consumer Confidence Index announced today that in response to “increasingly recession panicked soccer Moms, meth heads, bonus-less Wall Street traders and nearly everybody f-ing else” it would begin tracking consumer shoplifting habits. Unlike the Board’s well established Consumer Confidence Index which utilizes a household panel of 5,000 Americans, […]

Declaring “I wish to follow the path created by Pierre Cardin who put his name on anything he could” Andrew Weil unveiled his latest line of products on Valentine’s Day. Tossing off his Birkenstock’s, Dr. Weil showed off his socks, just one of the 12 styles under Dr. Weil’s Happy Toes brand. Made of organic fiber, cotton, […]