Context is everything.   Half-full or half-empty?  All or nothing?  White or black? New York Mets or New York Yankees?  (Okay, forgive that last comparison but if you lived in my brain, you’d understand).

Seriously, despite my degree in political science, my passion for policy debate (okay, arguing) and my progressive political DNA I can’t always figure out what to think about nuanced environmental issues.  Nuanced folks, not global warming or fracking.

But when I do start talking about the pernicious effects of weak regulatory oversight or something else seemingly ignored by the EPA I sound about as intelligent as G.W. Bush trying to pronounce the word nuclear.  Or worse, about as convincing as Wayne LaPierre talking about his desire to protect children.

Grist’ David Roberts offers help with this dilemma.  His May 6 piece provides an insightful look into President Obama’s environmental record and the heated debate among progressives about his leadership. While detailing the differences in opinion among eco-focused Obama Lovers and eco-focused Obama Haters, Roberts asks a pivotal questions, one that nearly made me fall out of my chair with its straightforward clarity.

Roberts asks if we should judge Obama “by the dysfunctional sh*tpile that is current American politics or by the crushing size of the climate need? Or somewhere in between?”

In many ways that’s the question of our time.   At least for people lucky enough not to worry if their drinking water is clean or about whether they’ll have enough food to eat.

The fighting in the organic foods industry is a perfect example of this conundrum.  The Organic Consumers Association accuses The Organic Trade Association of treachery, greed, and betrayal. If only I lived in a place where I could buy my food and groceries from the Sir Thomas Aquinas’ Utopian Food Coop I might wholeheartedly agree with the OCA.

But even though I’m lucky to live in San Francisco, I don’t get to shop in utopia.  So how do we judge things in our current economic/low wage/corporacratic sh-tpile?  And, by what measure do we judge big corporate business’ embrace of organic? 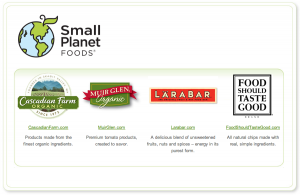 General Mills (brands at left), Pepsico, Coca-Cola, Hain-Celestial and other Wall Street heavies are all OTA members and among the corporate organic marketers that the OCA deems untrustworthy. Whether these companies put concern about healthy profits above a healthy planet, is a valid question.  But not one that necessarily deems their efforts and products untrustworthy.

NBN is glad that the OCA is on guard but worries about the tenor of their screaming.  The stark black and white of their accusations leaves many in the all too common place of being just too damned confused to care.

Despite huge growth over the last ten years, organic food sales account for only about 3% of all food sold in the U.S.  So maybe its time to rethink how we promote better for people and better for the planet products in a country where large corporations dominate.

In addition the impact of the yelling has others begin to distrust organic food all together, thinking its a sham and never understanding how the the farmer cooperative owned brand Organic Valley is very different from Horizon Organic and the thirty so-called local brands owned by Dean Foods, the world’s largest dairy company.

Ignorance has many causes of course and we’re not necessarily suggesting that the OCA is one of them but suggest that an approach aimed more at educating consumers how to be smarter might be far more effective than their current fire when you see the white’s of their eyes strategy.

Of course its boring to say most the answer might lie in shades of gray. But the corporate giants aren’t going away and  if corporations make profits on selling organic and other ‘better for the planet’ products is that a bad thing?

In an county where corporate interests dominate more and more things, smaller, owner operated stores and small manufacturers are increasingly uncommon.  Whether driven out of business or bought by greedy giants or  the result is the same.   Chain stores and corporations grow more powerful.   City Target, anyone?   Unlike Wal-Mart’s attempts to open city stores, Target’s urban expansion has oddly been welcome. For more read NBN on Stacy Mitchell and why we can’t shop our way to change.

Maybe its time to grab a smudge stick and get rid of the smell of our economic sh-tpile.  But oh wait, those smudge sticks are only sold in the Aquinas Food Coop.  Pick one up for me if you ever get there.

Next week NBN will look at another shade of gray discussing Eden Foods’ Michael Potter’s desire to limit health insurance options for female employees.  He’s the guy that people used to love for claiming how big organic was selling out.  More Advil please.  And hurry up with the smudge stick for crying out loud.